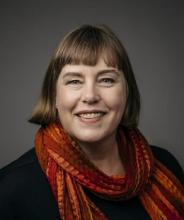 Pauline de Jong was designated as the Regulator under section 121 of the Oil and Gas Operations Act on August 2, 2020. The Regulator’s mandate is to regulate the exploration for and exploitation of oil and gas resources for the primary purposes of ensuring human safety, environmental protection and the conservation of those resources.

Pauline joined OROGO in May 2014 as the Senior Advisor, Legislation and Policy. In February 2019 she became the Executive Director and was also appointed Chief Conservation Officer, in accordance with Section 4 of the Oil and Gas Operations Act. This appointment was revoked when Pauline was designated as the Regulator.

Before joining OROGO, Pauline served in a variety of capacities with the Government of the Northwest Territories. Since 2005 she has worked in the establishment of protected areas, business development, human resources and Devolution implementation.

Pauline holds an International Masters in Business Administration from the Schulich School of Business at York University.